The Unveiled Christ: the sculpture that lives in the shadow of the Veiled Christ

The Sansevero Chapel is one of the most incredible architectonic masterpieces taht the city of Naples offers to its citizens, whose beauty is like no other in the world, that is guarian of one ot he most well-known sculptures: of course, we are talking about the Veiled Christ, masterpiece of such a skillful virtuosity especially in the use of the marble and in the play of lights and shadows set among its veil's folds.

But this statue is not the only one to enrich the monumental complex: set on the third floor of the building in 34 Nilo Street, almost perpendicolarly to this one, there is another one (unknown to most): the statue of the Unveiled Christ (or known as "Hidden Light".

This representation, totally contrapposed to its 'antagonist', describes the Resurrection moment; so, on one hand  there is the Death moment, represented by the Veiled Christ and, on the other hand the Resurrection one, representad by this astonishing sculpture made of plexiglass, realized in 2010 by the Neapolitan sculptor Giuseppe Corcione and inaugurated in 2011 on the occasion othe Jubilee's activities of Naples.

By its side, the statue is accompanied by two angels made of terracotta, of natural size and with dresses carved into wood, so much to remember the 18th-century Neapolitan sculptures. The building into which it is collocated, is the church of the Real monte Manso di Scala, in 34 Nilo Street. 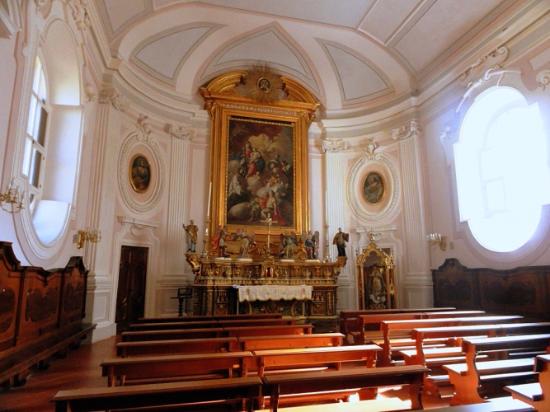 The Church of the Real Monte Manso di Scala, inside of which it is situated the statue of the Unveiled Christ, was founded in 1654 as a private chaple of the noble Princes of Scanno Palace and it is one of the most enchanting buildings of Naples, whose centre is just situated in corrispondence of the Sansevero Chapel, where is situated the Veiled Christ.

With its small dimentions, the church became a well-known site for the education of several  young Neapolitan noblesmen, thanks to the Real Monte Manso di Scala foundation which gave the chance to the sons of all the fallen noble people to receive freely an appropriate education thanks to the Jesuits friars.

Lately, after the great success gained with the increasing number of the admissions, the Mansos enriched it with several artistic works. As a matter of fact, on the wooden altar, besides the statues of S.Ignazio di Loyola and S.Francesco Saverio there is a beautiful painting by Francesco De Mura, inside of which there are represented both the founders while they are introducing the brand-new seminarists to Jesus and Mother Mary.

Then, in the sacristy, we can find two wooden crucified Christs put one in front of the other: the first with a dying look  and the feet parallely put, and the second in the classic position of the dying and bloody Christ. Finally, a 19th-century  pipe organ characterizes the Church's choir.

How to reach the Unveiled Christ by public transport

The sculpture is located in the heart of the historic center, near the San Severo Chapel.

It is possible to arrive on foot along the streets of the historical center, starting from both Corso Umberto and the nearby streets. In alternative by metro, take Line 1 which starts from Piazza Garibaldi and exit at the 'Dante' stop, then continue for 8 minutes on foot.

Or alternatively take a bus on Corso Umberto to reach Via Guglielmo Sanfelice where several lines pass with stop at Piazza Dante, the most frequent line is 201, although this route is longer, so it's better reach the sculpture by metro or on foot.