Things to see in Naples: the Royal Palace and its rooms full of history

The Royal Palace of Naples in Piazza Plebiscito

The Royal Palace of Naples is an historic building located in Piazza Plebiscito, one of the city's landmarks. It is one of the most representative museum complex in Naples, holding objects, decors, tapestries and rooms dating back to the Spanish and Bourbon periods and important paintings and frescoes by artists of the time.

Millions of tourists visit this complex every year, a majestic place that, through its rooms, tells us the splendor and the magnificence of the dynasties that have reigned over this city.

The history of Naples: the construction of the Royal Palace of Piazza Plebiscito

The Royal Palace of Naples was the historic residence of the Spanish viceroys for over 150 years. Its construction was commissioned by Fernando Ruiz de Castro, viceroy of the kingdom of Naples, to host Philip III of Habsburg, king of Spain, for his imminent visit, although this never happened. The position, dominating the port, in fact, would have been an excellent escape route for the king in case of enemy attack.

The project, started in 1600, was commited to Domenico Fontana, considered at that time the most prestigious architect in the Western world, who gave to the building a late-Renaissance influence with a function of representation rather than a fortified residence. The interiors were decorated with paintings by Battistello Caracciolo, Belisario Corenzio and Giovanni Balducci.

In 1734 Naples was conquered by Charles of Bourbon who decided to use the palace as a royal residence. The palace was enlarged and the marble and painted decorations were rebuilt in Baroque style by Francesco De Mura and Antonio Vaccaro.

Damaged by fire in 1837, the Royal Palace was restored by the architect Gaetano Genovese, according to the neoclassical tendency.

With the Unity of Italy, the Palace became the residence of the Savoy, even though the royals only occasionally lived there.  In 1919 Victor Emmanuel III of Savoy ceded it to the State Property, which converted it for the most part into the National Library. The oldest wing that overlooks the courtyard of honor was designated as a museum. 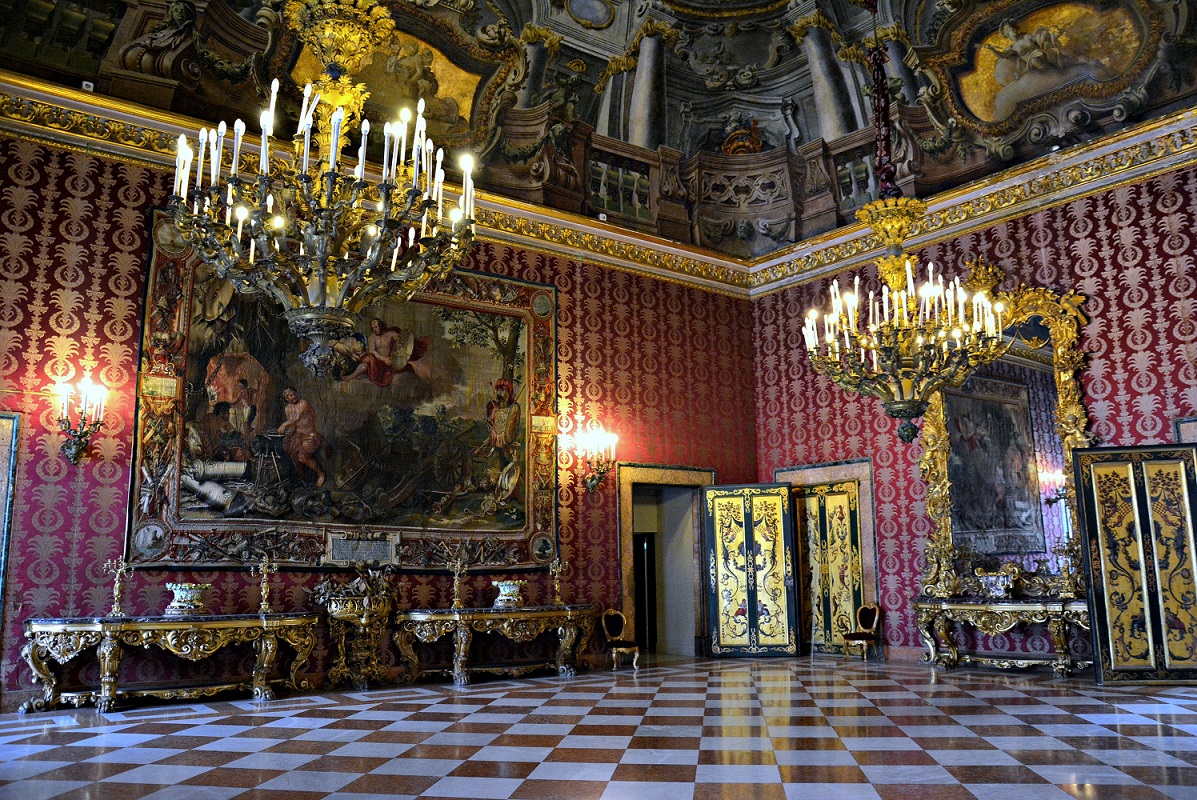 The Royal Palace has a main facade, which opens to Piazza Plebiscito, 169 meters long. Here, from 1888, some recesses were opened in which were placed the statues of the main kings of Naples in chronological order, with the intent of representing a continuity of the Savoy dynasty with Neapolitan history.

Inside the Palace you can visit the Historical Apartment, designed as a museum, which you can accessed through the staircase of honor, a majestic work that Montesquieu defined as the most beautiful in Europe. The Royal Apartment is composed of many rooms including the Court Theatre, the Throne Room, the Room of Mariacristina of Savoy and the Royal Chapel, which contain prestigious masterpieces made by the most famous painters of the Bourbon period.

Since 1923, the Palace has also housed the National Library dedicated to Victor Emmanuel III of Savoy which, with over two million texts, is the most important library in Southern Italy and one of the first in the world. Its rooms were created to host the court parties.

There are also numerous outdoor areas that you can visit: the courtyard of honor, the courtyard of the coaches, the belvedere courtyard and the hanging gardens, which offer a wonderful view of the Gulf of Naples and Vesuvius. From the courtyard of Honor you can also access the Royal Gardens, a park full of statues, avenues and "secret" paths.

The nearby San Carlo Theater belongs to the complex. It is one of the most famous and prestigious theaters in the world, built by Antonio Medrano, inaugurated on November 4, 1737 for the king's name-day. The theatre is connected directly to the royal palace with two foyers and through the garden.

How to reach the Royal Palace of Naples by public transport

The Royal Palace is located in Piazza Plebiscito, which is easily reachable by metro (line 1 at the Municipio stop) and from Vomero by the Central Funicular. There are also numerous buses that arrive in this area, the lines start from Piazza Garibaldi and follow cross Corso Umberto, the most frequent line is R2.

The Palace is open every day from Monday to Sunday, except Wednesday. It is also closed at Christmas, the first of January, on August 15th.