Visit Nola for the Feast of Gigli and more Nola is famous for Gigli Feast, World Immaterial Heritage of Unesco since 2013 with the Big Shoulder-borne Processional Structures, but Nola has also an important history, which makes it a perfect destination for those who love unconventional tours. The city is on the northeast plan of the territory of Naples, behind Vesuvio, but it is near to many countries and cities of Avellino and Caserta too: Nola is an ideal point to reach the most important cities of Campania.

Piazza Duomo: the heart of Nola A journey in Nola starts in Piazza Duomo, after a good Italian coffee and a sfogliatella. In the square of the lilies feast (as you have seen maybe on a journal) you find the statue of the emperor Ottaviano Augusto: it was a gift of Benito Mussolini, he gave it to remember the death of Augusto that happened in Nola in the 14 after Christ.

Then let’s go into the Cathedral. It was founded in the XIV century but now it looks like a neoclassical church because it was completely reconstructed after a dangerous fire in 1861.

Here you can know the religious history of Nola, from Saint Felice – a martyr dead in the I century a.C. – to Saint Paolino, bishop of Nola in 409. Look at the ceiling where is the painting of Salvatore Postiglione dedicated to Felice and then go into the crypt where tradition says that was buried Felice: a mysterious liquid – “manna” – appears every 15th of November, on the date that Church remembers the Saint.

Before going out, don’t miss to admire the beautiful statue of the Virgin Mary on the main altar: it seems made of hard white marble but it was made in “cartapesta”, paper-maché. If you like holy art, you can also visit the Diocesan Museum, which is in the adjacent palace of the bishop.

On the trail of Giordano Bruno and the Orsini in Nola 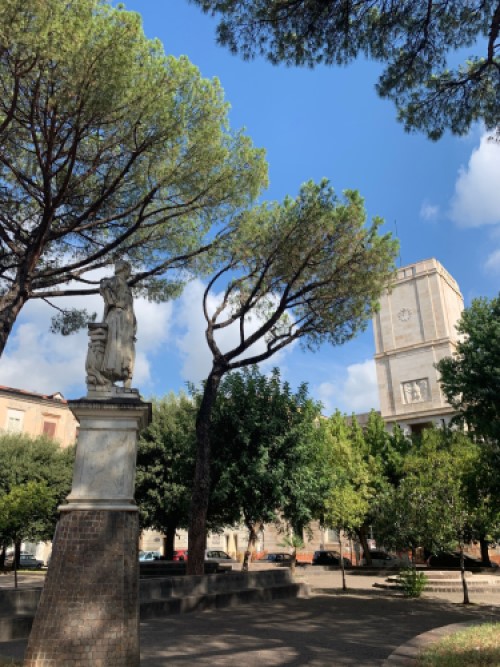 In the surroundings of Piazza Duomo, you can take Via Giordano Bruno and see one of the most beautiful historical palace of Nola, Palazzo Albertini, that has the base covered by roman spolia (fragments); on the opposite side of the street, there is Teatro Umberto, a building in liberty style. At the end of the street, there is the square dedicated to the heretical philosopher born in Nola in 1548. A statue of him is at the centre. Here there are many significant buildings: the ancient door of the city, Vincenti Palace, ex fascist palace, the Church of S. Francesco. This born as a medieval church and then it became a monastery until the XIX century. In the church, there are some beautiful paintings of Francesco De Mura and the monumental tombs of the Albertini family, powerful princes of the near Cimitile.

The biggest – and the most important – building of the city is Orsini Palace, the mansion of the counts that ruled Nola and its territory from the XIII to the XVI century. Every year, on the second weekend of June, there is a parade with over one hundred actors in historical costumes to represent the age of Orsini in Nola, Medievalia Nolana. In Giordano Bruno square there also is the Gesù Church.

The Archeological Museum of Nola Just a few steps away and you are in the Archeological Museum of Nola, situated in the ancient monastery of Santa Maria la Nova. This is the perfect place where you can know all the history of Nola and his important role. The museum is open from Tuesday to Sunday. The collection most important is the prehistoric one: many manufactures found in 2002 in Nola in the so-called “Pompei of the Prehistory”: a big explosion of Vesuvius 4.000 years ago, as the eruption of the 79 a.C. in Pompei, destroyed and buried a small village of Bronze Age. In the Museum there are also many roman artistic objects and epigraphs as the copy of Cippus Abellanus, an inscription in the Oscan language about ancient Nola. On the first floor of the museum, there are paintings and decors from churches and monasteries suppressed.

Don’t leave from Nola without stopping in Pro Loco, a tourist office located in an ancient chapel in Corso Tommaso Vitale. Here you can see photos, videos, miniatures of the Lilies and know everything about the feast at every moment of the year. The next time you will be in Nola, you can visit the archaeological sites and the monuments of Cicala hill.

This article is written by Giulia Nappi, licenced tour guide in Campania and active member of Pro Loco in Nola.

Pro Loco di Nola Città d'Arte actives and works in the city for over forty years because of the active part in the organization and local tourist welcoming and promotion in association with Comune di Nola. It is involved in culture, tourism and promotion of the area organizing characteristic events.

They are in Corso Tommaso Vitale, 9 Nola. For more information about Nola tours and culture, contact them: