Naples stairs: an uphill journey among the most beautiful views of the city Naples has always been a city suspended between hell and paradise. Since the ancient Greeks, in Neapolis, the doors to the underworld have been placed, so as to make it a place of ascension par excellence. And right here, where the souls looked for the way to the afterlife, the stairs, ramps and steps are not just simple vertical connections, but become real arteries, which constantly pulsate blood.

Scrolling through these streets gives you a flow of emotions that, punctuated by every step, at the urgent pace of the step gives a different feeling, thanks to a view, a perfume, a color or a sound typical of the tradition.

The stairs of Naples: crossing the city between ramps and steps

Through the city of Naples, between its alleys and its buildings, stairs and vertical paths are hidden, which unite the city at different heights, allow you to move from one part of the city to another, giving you breathtaking views and routes through the history of the city .

Almost most of the stairs of the Neapolitan historical center originated during the Spanish domination in Naples to connect the city to more levels.

But let me show you some of the most beautiful public stairs in Naples:

Villanova climb: a staircase to admire the wiews of Posillipo

Ascent Villanova to Posillipo - The panoramic view of Posillipo is a must for those who want to visit Naples. Just think of the photos and the most beautiful postcards of Naples, which immediately springs to mind the memory of the Gulf and the city, seen from the Posillipo hill. It is right here, among the most beautiful views of the city, that a small path made of stairs from Via Manzoni leads to the water of the tuff rocks of Posillipo, which unravels among the meanders of the tuff hill. We find ourselves uphill Villanova, a path carved into the hill that between ramps, steps and tunnels, gives us a suggestive glimpse of Naples posillipina.

The Montesanto staircase: from the city center to the Naples hill

Montesanto staircase - One of the most functional and most used ramps in the city. Made to connect one of the squares with one of the most important local markets in the city to the upper part of the city. A stairway carved into the tuff of the hill and covered with marble and the typical paving of the Neapolitan building tradition.

The Pedamentina in the Vomero district: Naples from above through a breathtaking view

Pedamentina at Vomero - One of the most beautiful staircases of the city, dating back to the 14th century, made up of over four hundred steps, which manages to connect the historic center to two historical attractions, among the most beautiful in the city, such as the Certosa di S. Martino and Castel S. Elmo, on the Vomero. A historical trace that through the gardens of the Certosa and the Vomero hill gardens, offers a view, like few in the city, over the Gulf of Naples and the city itself with the historic center and Spaccanapoli in the foreground.

Historical palaces of Naples: the stairs in the Spagnuolo palace

Palazzo dello Spagnuolo - Among the most important monumental buildings of the Neapolitan historical center I cannot help mentioning you, Palazzo dello Spagnuolo. At the entrance of one of the most important districts of Naples, the Sanità district, there is one of the most visited buildings by tourists, home to one of the most beautiful monumental staircases in the region. The palace is one of the finest examples of Baroque style architecture, thanks above all to the main double ramp staircase, with hawk-wing stairs, which constitutes the main internal façade of the building. The staircase with frescoes, stuccos and piperno details stands out as an emblem of the monumental Neapolitan stairs.

Palaces of Naples: the grand entrance staircase to the Royal Palace

The entrance stairway of Palazzo Reale - Honorable Mention, for a panoramic view of the stairs, to the Royal Palace and its Monumental Staircase to access the halls of the historic Apartment. Designed by Francesco Antonio Picchiatti in the seventeenth century, but built only a few centuries later by Francesco Gavaudan. Coated completely in various rosy and Carrara marbles and decorated with stuccoes of the most valuable artists of the period. 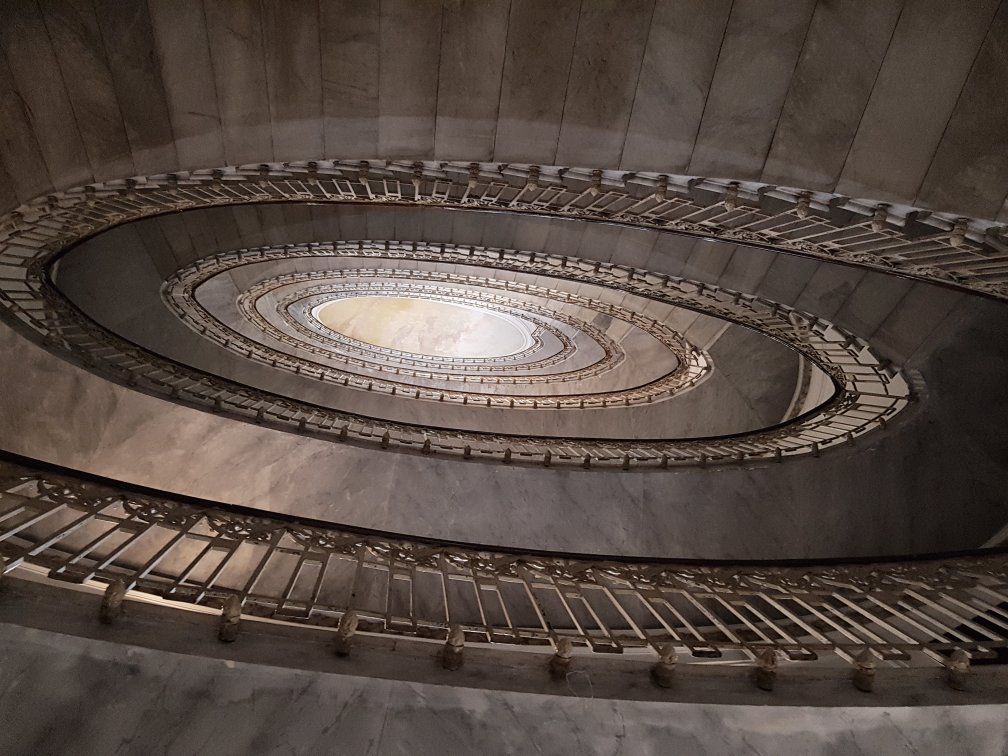 Palazzo Mannajuolo - Near the Riviera di Chiaia, there is one of the famous Neapolitan historical buildings, more for its interior than for the exterior. It represents one of the best examples of Art Nouveau architecture in the city. The structure rotates all around the central part in the shape of an ellipse, described in the central part inside which the main ellipsoidal staircase is housed which acts as the generating form of the whole structure. Formed by a structure completely in embossed marble and with a wrought iron balustrade.

We told you a brief overview of the best stairs in Naples, but the city is full of other wonders hidden among its alleys: the ascent of the Moiariello to Capodimonte, the steps of San Francesco a Chiaia, the Trabuco palace, the palace of the "spirit "to Health, the Church is Santa Maria alla Sanità, but I could mention dozens more that could catch your attention, all you have to do is run to Naples.