Jago, the artist of social networks 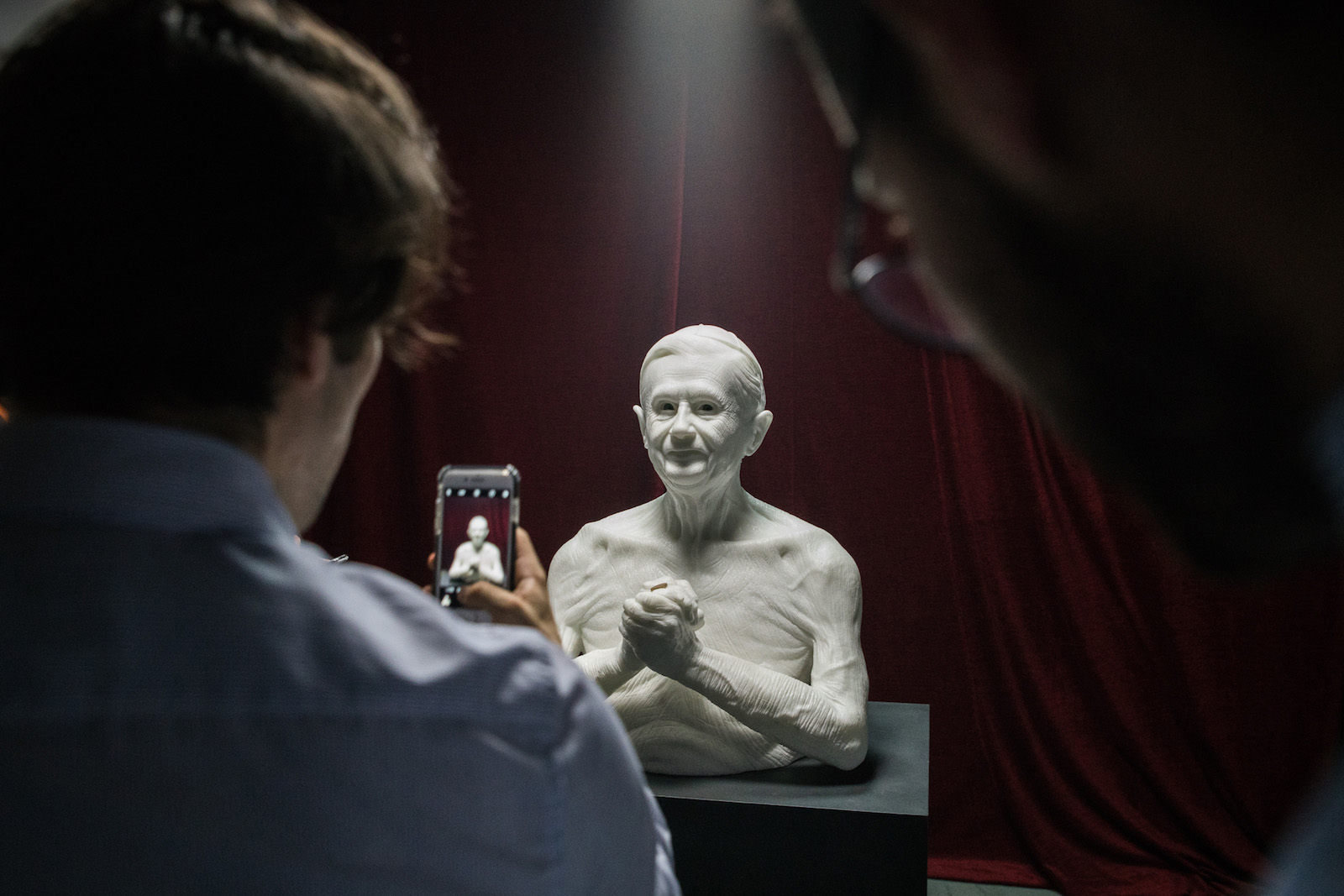 Jago, stage-name for Jacopo Cardillo, was born in Frosinone (Italy) in 1987. In his city, he attended the art school and then the Academy of Fine Arts.

When he was only 23 years old, he realized a marble bust of Pope Benedict XVI. He showed the bust to the art experts of Vatican City, but they didn't accept it because they didn't want the Pope to be represented without eyes. But the work didn't go unnoticed and the following year, 2010, Jago was selected by professor Vittorio Sgarbi to participate in the 54th edition of the Venice Biennale, where he exhibited the marble bust of the then Pope Benedict XVI for which in the same year he received the Papal Medal.

In that year, Jago also leaves the Academy. His teacher opposed and vetoed his invitation. Jacopo wasn't intimidated and exhibited his work all the same, paying the consequences. But since that moment, his path to success has begun!

In 2013 Jago realized one of his most significant work: it's "Habemus Hominem", created after the resignation of Pope Ratzinger. After which Jago carves the original sculpture of 2009 again, representing the naked Pontiff and this time he adds eyes.

Called the "social artist", Jago maintains a lively and direct relationship with the public through the use of social networks. In contrast with the romantic idea of the starving artist, Jago is determined to give back an entrepreneurial image to the category.

In 2019, on the occasion of ESA's Beyond mission, European Space Agencies, Jago is the first artist to send a marble sculpture to the international space station. The sculpture entitled "The First Baby", depicting a baby's fetus, will return to earth in February 2020 under the custody of mission leader, Luca Parmitano.

Jago's link with the Rione Sanità 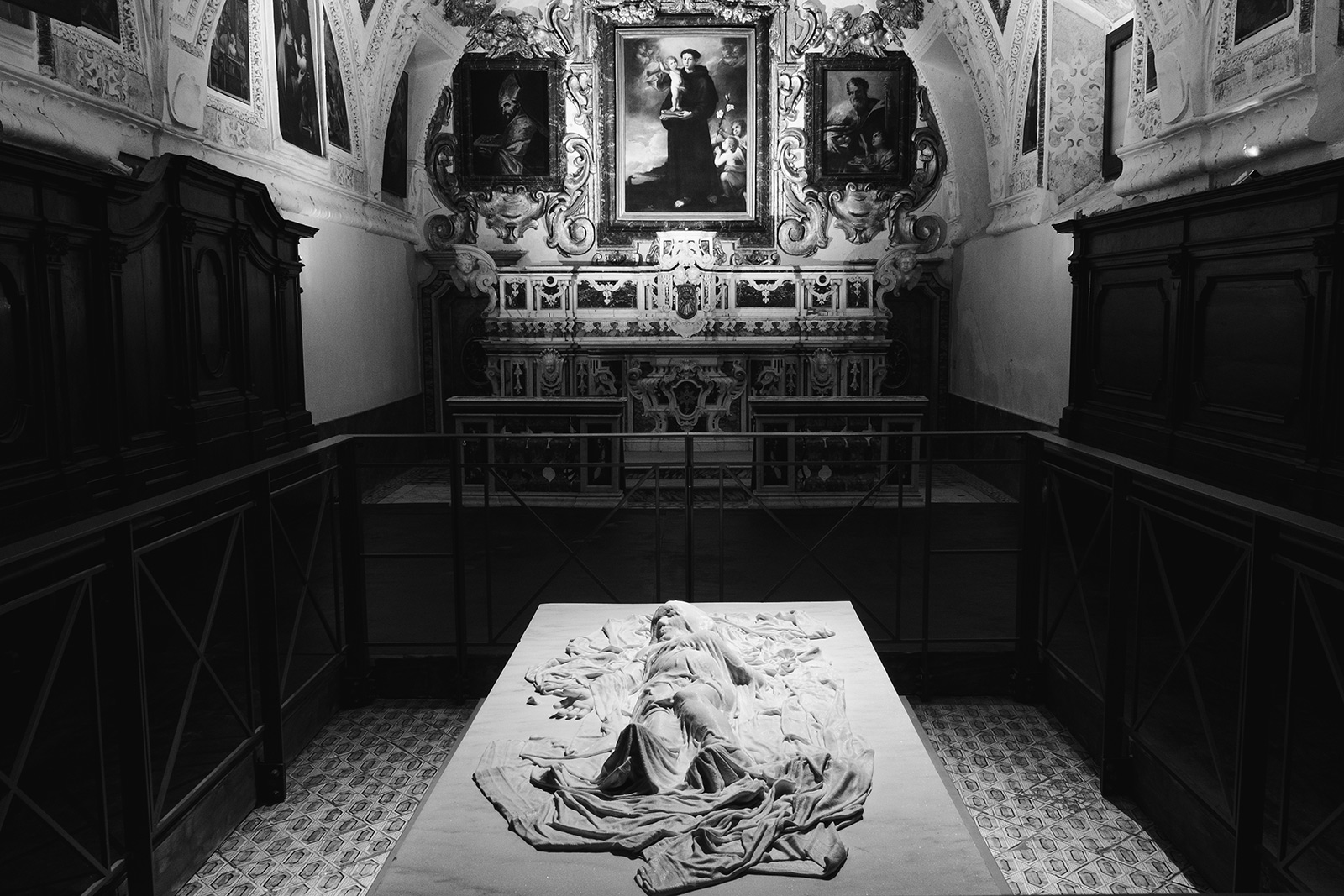 Jago's artistic research has its roots in the techniques inherited from the masters of the Renaissance. Its passion for Naples starts when he studies the famous sculptures kept in the Chapel of Sansevero, in particular, the most famous marble group, the Veiled Christ.

So, from here the relationship between Naples and the young prodigy of the international sculpture was born! In 2018, following the exhibition at the international Armony Show in Manhattan, Jago moved to New York to create the work entitled "Figlio Velato". Like the Veiled Christ of Giuseppe Sanmartino, under the veil are hidden the tragedies of the century. Instead of Christ, Jago represents a dead child, a symbol of innocence that, nowadays, dies faster and faster and it's harder getting it back.

From the first moment, the work has been intended for Naples. It's permanently exhibited in the Sanità district inside the Chapel of the Church of San Severo Fuori le mura. Thanks to this act, Jago has been supported by Father Antonio Loffredo that offered him to use the old Church of Sant'Aspreno ai Crociferi, closed for worship, as his art studio.

From this moment, between Jago and Naples, in particular Rione Sanità, starts a very powerful bond. When he came back to Italy from New York, the artist decided to go to live in this district of Naples.

"I wanted to make a qualitative leap", the artist admits, smiling. "The Sanità will be the Manhattan of the future. Here there are human and artistic resources with amazing potential".

His presence in the district is a sign of great light and hope, not only in an artistic way but social too. In a few months, an ex place of worship, abandoned and degraded, has been transformed in the workshop of a sculptor, that, in turn, opens it to the district's youth.

The Sanità will be the Manhattan of the future. Here there are human and artistic resources with amazing potential.
Jago

The abandonment of the child in the night

On the 5th of November 2020, during the night, a huge marble baby "appeared" in Naples, more exactly in Piazza del Plebiscito, one of the most important squares of the city. This statue is the work of the sculptor Jago and its name is Look-down. A meaning wordplay during a year like 2020, full of restlessness, deeply signed by the lock-down and the pandemic.

So, let's go together to discover who is Jago and his link with Naples. Why did he decide to put his work, worth a million dollars, in the most famous square of the city? 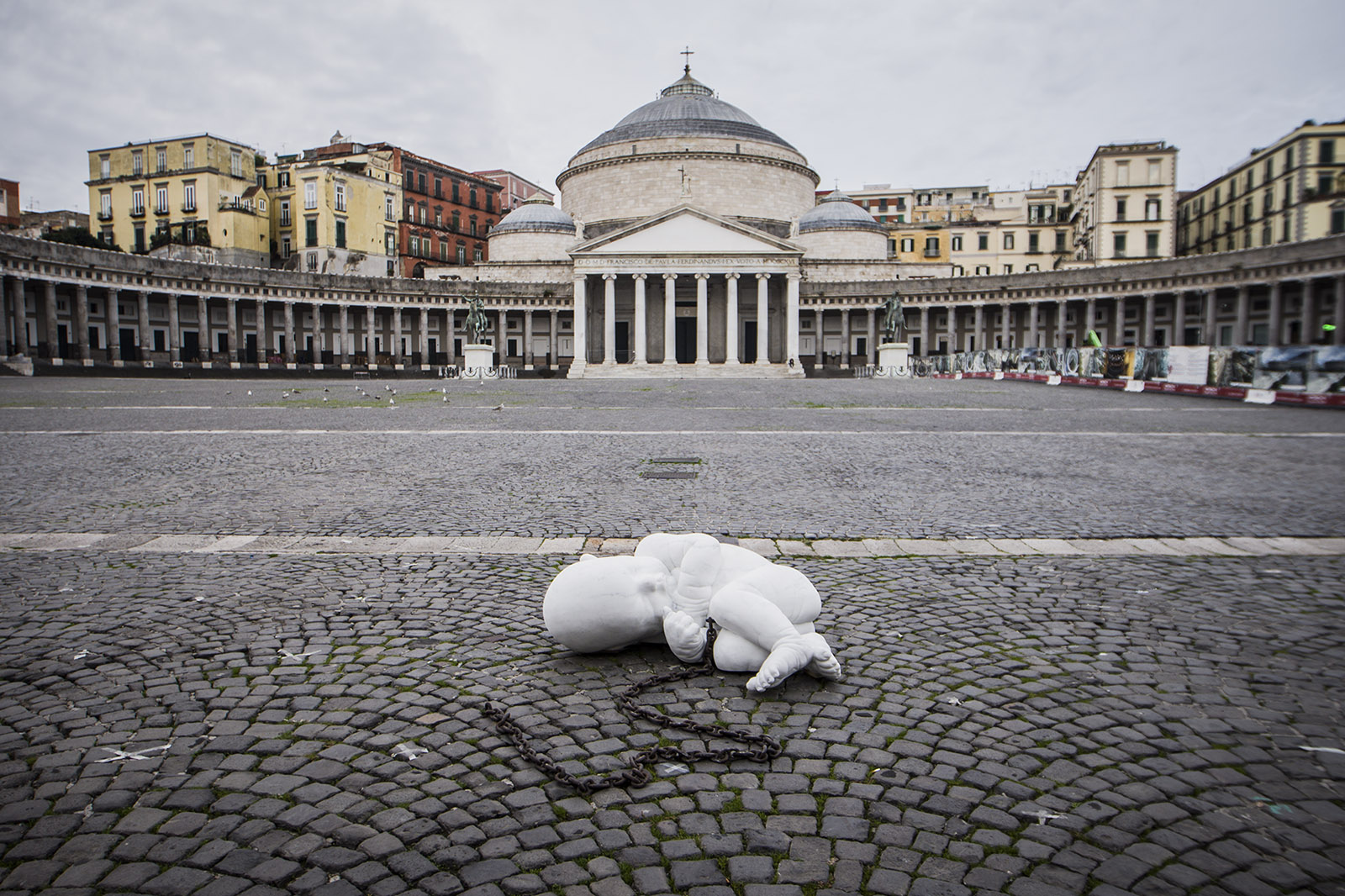 Jago left one meter and sixty-five of white marble in the heart of the city. A deliberately provocative action of the artist that was possible with the help from the San Gennaro Foundation of Naples, which has always been committed to relaunch and enhance the Rione Sanità.

"Look Down" took the form of a big public installation. The work represents a baby with tired and closed eyes. Its name is Homeless. Instead of an umbilical cord, it has a chain, symbol of a social condition that can't change.

Jago thought about building the sculpture when he still lived in New York. There, he used to meet homeless people on every street corner while other passer-by seemed to not see them anymore. "Newborns are defenceless just as homeless people"

Then, following the pandemic, the lock-down and the social issues led by it, Jago decided to bring his sculpture in Piazza del Plebiscito giving rise to the Look Down installation. It's a complaint about the fragile condition of a whole slice of society crushed by the economic crisis, but also an invitation to look down...towards the last and the needy!

The vulnerable baby was, unfortunately, the victim of an episode of vandalism made by some teenagers that shared their video on TikTok where they kick the sculpture. But this negative event has actually a silver lining...

After watching the video Jago decided to meet the guys. The artist invited them to his art studio and showed them his works and the labour behind. The teenagers understood their mistake and apologized. In reply, Jago invited them to come back whenever they want to assist and learn to carve.

With his art and kindness, Jago was able to create a link! This special meeting wouldn't be an exception, but a beginning. An opportunity for these dull kids that see in front of them only neglect and violence.