Discovering the locations of the film "The Hand of God".

Available on-demand from 15 December on the Netflix platform is the latest effort by Neapolitan director Paolo Sorrentino, The Hand of God, currently in the running for the Oscars 2022 as Best Foreign Language Film.

A highly autobiographical film that tells us a significant and intense cross-section of the director's adolescent life and his Naples. The film was shot almost entirely in and around Naples (except for a few scenes in Sicily and Abruzzo).

Through the eyes of the protagonist Fabio Schisa (played by Filippo Scotti), Sorrentino recounts his adolescence, his love for Maradona (to whom the film is also dedicated) and the tragic death of his parents (killed by carbon monoxide fumes).

You are in Naples and would like to know where Sorrentino shot some of the main scenes. Read on and discover the locations of The Hand of God.

I did what I could. I don't think I did so wrong.
Diego Armando Maradona

The film opens on the splendid sea of the Gulf of Naples, with Maradona's phrase is written above it. A dedication to his idol but perhaps also a way for the director to present his film to the audience and tell them that, come what may, he knows he has done what he had to do and is satisfied.

The beautiful blue sea is then interrupted by the sound of a helicopter, but only for a few seconds. Then, a long shot shows the spectator of the city beauty from the Lungomare di Napoli.

The city appears from afar at dawn, waking up to Castel dell'Ovo and the Riviera di Chiaia, to the trees of Mergellina and Posillipo, to the island of Nisida. Suddenly, the camera focuses on a car: at the edge of which we discover St. Gennaro (played by Enzo Decaro).

San Gennaro and the Munaciello: between Piazza del Plebiscito and the Miglio d'Oro

From light, we suddenly switch to darkness. We are in a 1980s Piazza Plebiscito, full of cars and buses.

Here we make the acquaintance of Aunt Patrizia (played by Luisa Ranieri). It is a hot summer evening and, San Gennaro approaches her at the bus stop. He takes her to meet the Munaciello, the Neapolitan mythological figure of the mischievous child monk.

Aunt Patrizia's meeting with the Munaciello takes place in the Villa del Cardinale in Torre del Greco, along the famous Strada Regia delle Calabrie, now Via Nazionale. It is one of the Vesuvian villas belonging to the Miglio d'Oro. The choice of this villa for the film is not accidental: here on its summit is the aedicule with the statue of San Gennaro contemplating the infinite magnificence of the sea.

Vomero is where the protagonist Fabietto lives with his family. The movie's building is where Paolo Sorrentino lived for 37 years.

The flat is on Via San Domenico. The house in the film is on a higher floor than where the director used to live.

In the movie, we see also his schoolyard. The director attended the Istituto Salesiano Sacro Cuore in Via Scarlatti. In the film is the courtyard of the Don Bosco Institute at Doganella.

Another scene in the Vomero is where they intern Aunt Patrizia. He shot in the Domenico Martuscelli Institute, a hospital for blind and visually impaired people.

Fellini's casting in Naples and the meeting with Maradona

As you might guess, Paolo Sorrentino is a great admirer of director Federico Fellini. In the film, Sorrentino recounts a real-life episode involving the latter.

When he was a teenager, Sorrentino remembers Fellini came to Naples for audition extras for his films. "Fellini felt that there were old and strange faces in Naples". At one of these castings, his brother Marco, who wanted to be an actor at the time, showed up.

On this occasion, Sorrentino/Fabio accompanied his brother, who didn't have success. Leaving the castings, the young Sorrentino and his brother caught a glimpse of Maradona in his car in Via Orazio. He lived in Via Scipione Capece at the time. All this with the gulf and Vesuvius in the background. 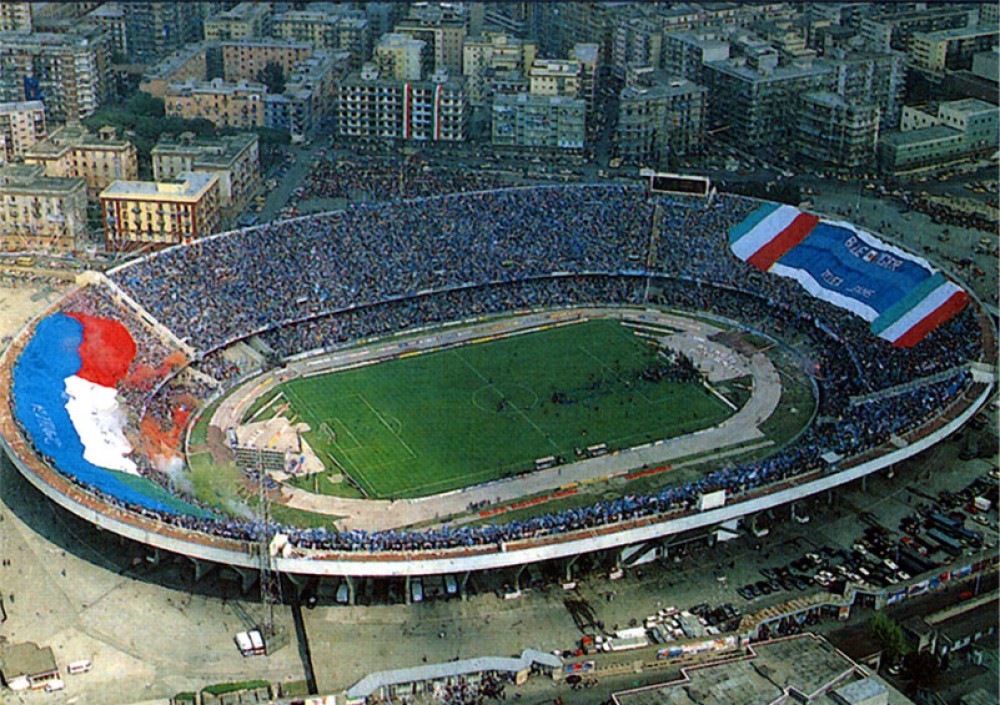 The film has constant references to Diego Armando Maradona. Already, as the title suggests, it refers to the nickname (Mano de Dios) given to him on the occasion of his hand goal against England in the 1986 World Cup. Fabietto/Sorrentino is obsessed with the figure of Maradona, who will be fundamental in his life.

Consequently, the Maradona Stadium, still the San Paolo at the time, in the Fuorigrotta district, could not fail to be one of the film's locations. Thanks to computer graphics, the movie shows you the stadium how in the 1980s.

Galleria Umberto I and via Toledo

The Galleria Umberto I appears several times in the film. It is here that one of the film's most dreamlike scenes takes place, in which Fabietto goes to spy on the movements of a mysterious movie, shot by Antonio Capuano, his future mentor. It is here that he discovers his love of the camera.

From the Galleria Umberto I, we walk towards Via Toledo to reach the building of the Banco di Napoli, where his father (Toni Servillo) works. In these streets, the father confesses to his son that it was here that he first met his mother (Teresa Saponangelo). During the war, in an air-raid shelter between Piazzetta Serao and Piazzetta Augusteo.

Family holidays on the Sorrento Peninsula

Although Naples is the core location, some of the film's scenes were in beautiful places on the Amalfi and Sorrento coasts between Agerola, Massa Lubrense and Punta Campanella.

The big house where the whole family gathers in the summer to meet the new boyfriend of Fabio's aunt is Villa Giusso Astrapiana in Vico Equense, a former farmhouse inhabited by monks and now hosting events. As for the scene of the whole family on the boat, admiring Aunt Patrizia sunbathing completely naked on the bow, this was shot in the beautiful stretch of water at Massa Lubrense. Finally, the underwater scenes were shot in Conca Dei Marini and at the port of Cetara, in the suggestive Grotta Dello Smeraldo.

During the Schisa family's seaside holiday, Fabio's father spoke to his wife about Eduardo's Island, which is none other than Scoglio Isca: a small island in the Fiordo di Crapolla, a hamlet of Massa Lubrense.

The great Eduardo De Filippo bought it in 1947. The islet is reachable only by boat.

Today the islet is no longer owned by the De Filippo family because the heirs sold it to the Antica Sartoria company.

In the company of a new acquaintance, the smuggler Armando, Fabietto, reaches Capri by sea at night. They go there to have a good time. Then, they find themselves completely alone, sitting in Capri's famous Piazzetta, which is completely deserted.

Despite the closure of all the bars, the two boys meet Adnan Kashoggi, the richest man in the world, in the company of a famous actress. She insults Fabietto for looking too long.

In the end, the two boys leave the Piazzetta to go for a night swim in the magnificent Grotta Azzurra. 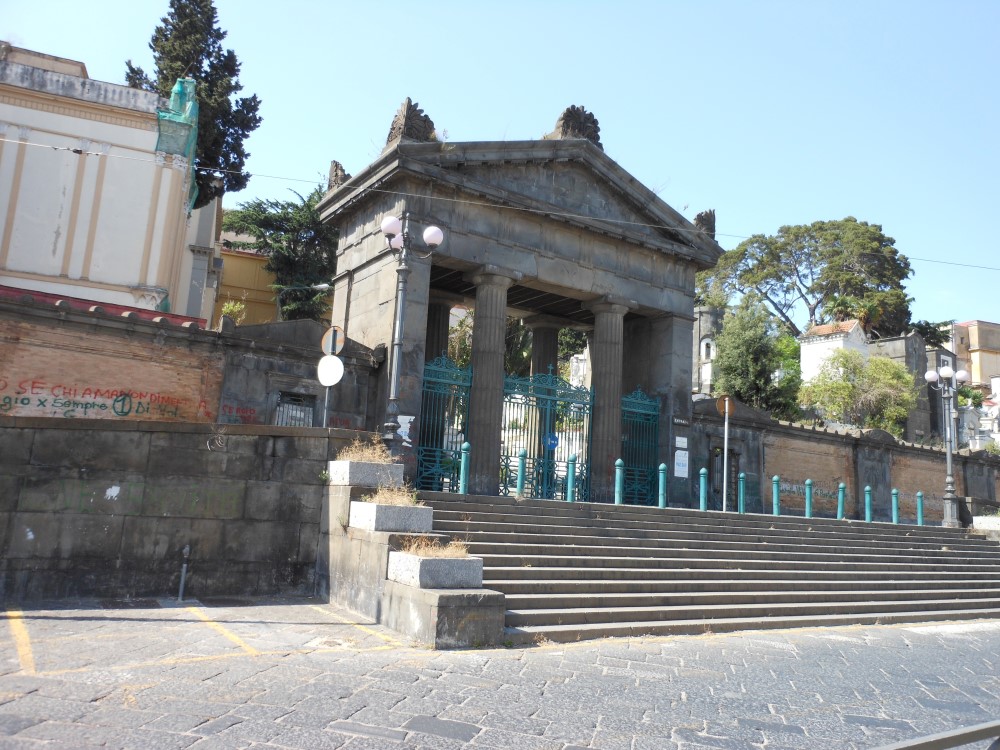 Here are the film's most tragic scenes that take place here: the funeral of Fabio's parents.

The Poggioreale Cemetery is the main cemetery in Naples in terms of size and layout. It is one of the most significant cemeteries in Europe. Due to its overall shape, the quality of some of its parts and the substantial decorative and sculptural apparatus.

In one scene, Fabio goes to the theatre to attend the performance of a girl he likes, Yulia, who is an actress. Here he finally meets the director Capuano (played by Ciro Capano).

The theatre where the story takes place is Galleria Toledo, a stable theatre of innovation located in the Quartieri Spagnoli in Naples. The theatre's name was chosen as a reference to art (Galleria) and the meeting place and as a tribute to the neighbourhood in which it stands (Toledo).

The theatre scene is followed by the final. Here Fabio and director Capuano have a long chat and order the boy to stay and make films in his hometown of Naples. While he finally decides to run away and seek his fortune in Rome. Hence the famous scream of intimation, "don't disunite!".

The backdrop for this night of words and stories is Villa d'Abro in Posillipo, formerly Palazzo Ranaldo: one of Naples' historic villas, not far from Villa Elisa.